Whiskey Flat Days is upon us 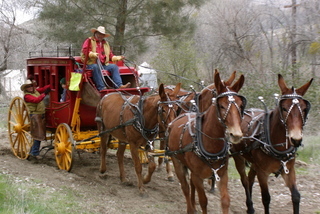 There’s some cooler weather in the forecast for Tuesday of this week, and maybe some rain, but it’s looking like it’s going to be a warmer and mostly clear weekend. Visitors might still want to bring a jacket though, especially on Sunday. Oh, and there’s a possibility of snow on Monday, so it looks like we’re in luck and WFD weekend is getting all the nice weather for the week, right between some cloudy and cold days.

After quite a bit of consideration, I’ve decided that I will be updating the WFD App this year. Because the Kernville Chamber of Commerce has refused to work with me for the third year now, I have been debating on whether or not the work that I put into this app is worth it. But, with over 10,000 page views this last month and having found my way to the top of search results, I feel a sense of obligation to give visitors as much useful information as I can. So, I’ll be adding whatever events I can find information for, and I won’t be able to add any vendors or other places until late Friday afternoon after everything is setup, but I’ll do my best.

Many are surprised to discover that the WFD App is owned and operated by KernValley.US and is unaffiliated with the Kernville Chamber of Commerce. That isn’t the way that I wanted things to be, and I created the WFD App specifically for the Kernville Chamber of Commerce under terms that they agreed to, but they failed to uphold their end of the agreement we made… So here we are.

A little history of the WFD App

Back in late 2019, I approached the then-President of the Kernville Chamber of Commerce offering to build an app/website for Whiskey Flat Days. Rather than direct payment, all that I asked for was that I be given information about events, vendors, etc., that the Kernville Chamber of Commerce recognize WhiskeyFlatDays.com as their official website for the event, and that I be able to make a little profit for my work through things like advertising. It would be their website that I built and maintained, and all that was required of them was giving me information I needed, making a few posts on Facebook about their new app, and printing a few flyers.

My offer was eagerly agreed to, and we had a few meetings to discuss what the app would include, how I would get the information I needed, prioritizing certain features, since two months isn’t a very long time, and a little bit about features such as online vendor registrations and mayor races that might be added in the future. We even discussed bringing in a TV to the WFD Info Booth and having the WFD App on a large screen to help visitors know everything that was going on around Kernville. I also paid to become a member of the Kernville Chamber of Commerce so that I would be in a better position to know things sooner rather than later.

For about the next month and a half, nearly all of my spare time is spent building the WFD App. I went out and got the coordinates to several businesses in Kernville so that they could be marked on the map, and I also got the coordinates for every marked vendor space on the streets. I also kept going into the office to ask about vendor registrations so that I could put in a vendor at the spaces I had marked and asked if anyone knew when and where events were, but I only found out about events when they were posted on Facebook, and it took me walking around all of Kernville during Whiskey Flat Days itself to know where anything was. The Kernville Chamber of Commerce had not given me any of the info I was promised. Also, they had done nothing to recognize or promote the app, and I ended up designing and hanging up a few flyers.

After WFD in Feb. of 2020, things were uneventful for most of the year. As I’m sure we’re all too aware, 2020 was the year COVID19 came to the US, and that made WFD for 2021 at risk of being cancelled. 2020/2021 were years of online events and significant changes to a great many things, and I knew that the WFD App would likely play an important role that year, all the way up to having mayor races operate via online donations and possibly having the 54th Annual Whiskey Flat Days an online-only event. So I reached out to the Kernville Chamber of Commerce early that year.

When I first contacted them later in 2020, I was somewhat surprised that they were wanting to make a deal to purchase WhiskeyFlatDays.com from me. The WFD App was built explicitly for them and they were trying to buy from me something I had been trying to give to them. But, I thought this would be a good way of putting the terms that had already been agreed to in writing in a contract, so pretty much all I asked for was what had already been agreed to, plus the addition of “Promotional Add-Ons” to the vendor applications. After the Kernville Chamber of Commerce having done nothing they said they were going to do the previous year, I really wanted the agreement in writing. There was a brief period of negotiations before it became clear the WFD would be cancelled in 2021 and there wouldn’t be enough time to update the WFD App to handle it being an online-only event.

This year, I contacted the Kernville Chamber of Commerce as early as Oct. of 2021, I think it was, hoping this would be the year that they finally worked with me on the app I had built for them. 2020 had been a bit rushed and chaotic, 2021 basically didn’t happen, but WFD 2022 had a chance of going well. We discussed some of the previous negotiations for a bit and I reminded them that I had built the WFD App for them and that they had agreed to the previously mentioned terms, and asked that they let me know soon so that I had the time to release the iPhone and Windows apps I had ready… And they never got back to me…

And so, in order for the WFD App to continue, I’m going to need the help of the community. Local businesses may be added, not just to the WFD App, but also to the KRV Guide App and KRV Maps App by submitting their info to https://places.kernvalley.us. Any author may submit relevant articles to be published on the WFD App. Anyone who knows HTML, JavaScript, CSS, Markdown, YAML, etc. may contribute to the code of the WFD App through the repo on GitHub. Businesses and vendors may create ads for any apps through KRV Ads. Photo and video submissions are more than welcome and will be credited. If you have any design skills that you want to volunteer, contact KernValley.US. And if you’re able to help in any way with updating events or Porta-Potty or vendor locations, let me know and I’ll be extremely grateful!

KernValley.US has always been about collaboration and community. That is why every KernValley.US app is Open Source and all content is licensed under a Creative Commons License — anyone and everyone may contribute, and all contributions benefit the community as a whole. If you want to publish an event, you can submit it to KRV Events, and anyone wanting a local calendar of events may use the <krv-events> component. The same is true for everything submitted to KRV Guide and Maps.

To the Kernville Chamber of Commerce

The Kernville Chamber of Commerce is unwilling to help me help the community and businesses of the Kern River Valley. I am eager to promote the businesses of the KRV regardless of whether or not they’re paying me to do so. I want visitors of WFD to know where vendors are and what they offer. My focus for the WFD App and everything is for it to be of value to the community and the users, but it’s quite difficult to do this by myself, and I could really use some help in helping everyone.

Of course, if the Kernville Chamber of Commerce wants the app that I built for them, all they have to do is exactly what they already agreed to do. It’s that simple. All that I have asked for is the information that I need to share in the app, promoting the app that would belong to them, and me being able to advertise things like vendors and local businesses on the app (out of which I think we decided that 40-60% would go to the Kernville Chamber of Commerce). I cannot legally do things like donations to mayor races or selling merchandise without them, and all of this would be a whole lot easier if they shared information directly to the WFD App rather than me having to search for it. The door is open and the app is theirs if they would only keep their word.